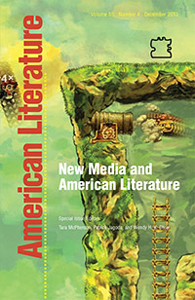 This special issue pairs two terms, “new media” and “American literature,” which are rarely put in the same sentence, except as opposites. “New media,” stemming from “mass media,” carries with it connotations of entertainment, quick communication, and ephemeral information—that is, something other than literature, which implies ineffable and lasting artistic merit, density rather than clarity, and most traditionally, familiarity with letters and books. But why is it that new media and literature, information and meaning, are so frequently opposed? What work does separating them do—and what work goes into disentangling them? Most importantly, what insights regarding both new media and American literature can emerge from their conjoining, a linkage that invites many earlier theoretical projects—from New Historicism to cultural critique—to question a stark separation of the literary from literature?

The authors of the wide-ranging articles in this special issue all respond in different ways to these questions. They all start, though, with the premise that literature, technology, and media have always been deeply intertwined. The essays in this issue explore several aspects of the emerging new media landscape, including data visualization, hypertext markup language, videogame studies, the digital humanities, and multimedia archives. Alongside the print publication, this issue includes four online essays created with “Scalar”—a born-digital, open source, and media-rich scholarly publishing platform. Contributors include Craig Carey, Lauren F. Klein, Jeff Scheible, Richard Jean So, Patrick Jagoda, Gary Hall, Curtis Marez, Jeffrey Shandler, Steve Anderson, and Jentery Sayers.